QR codes can be used for a lot of things – Our Asset Stickers use website links to allow people to see your contact information - and scanning them using your iPhone or iPad couldn't be easier.

If your Apple phone is running iOS 11 or greater, then your phone has QR Code recognition built directly into its camera app, which means all you need to do is open the camera app and point you phone at the code in question.

You'll get a notification appear on your screen once your iOS device reads the information in the QR code (which generally takes less than a couple of seconds), it then prompts you to action the link the QR code points to - a quick tap on this link and you'll be taken to the desired location, usually within the Safari web browser.

If your phone is not able to run iOS 11 then you can download a free QR code reader app from the app store. 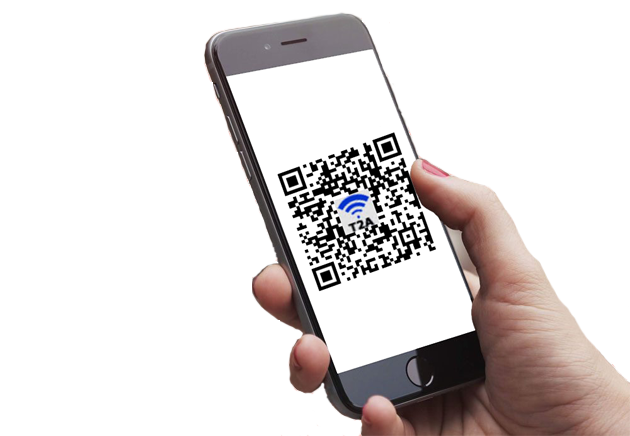 How to scan a QR code on iPhone and iPad

Step one: Open up the camera app on your iPhone or iPad
Step two: Hold the device's camera up to the QR code
Step three: No need to hit the shutter button, your iOS device will automatically recognize the QR code and provide you with an on-screen notification. (Make sure you have mobile signal or you're connected to Wi-Fi, as you will need access to the internet to view the information)
Step four: Tap the notification - this will open your web browser and automatically load the webpage contained within the QR code.

Scanning a QR code on your android device can be done in a number of ways depending upon which version of android you are using.

If you have a new phone and it is using Android (Android 9, Pie) then there is a built-in QR code scanner on Android. It works inside the Camera app when Google Lens Suggestions is activated.

If your phone is using Android (Android 8.1, Oreo) and you are using the Google camera app then there is a built-in QR code scanner which uses Google Lens Suggestions.

If your phone is using Android (Android 8.0, Oreo) then you should have Google Assistant which should already have the Lens option too. It can be found via the camera icon when the Assistant is in use. If it's not there, you can download the Google Lens app directly from the Play Store. It's one of the best QR readers for Android

If your phone is using a version of Android before Android (Android 8.0, Oreo) and you are not able to use Google assistant then there are several free QR reader apps available from the play store.

QR Code Reader is one of our favourite apps for scanning QR codes, it’s simple and free, works quickly, and doesn’t blast you with advertising (unlike many rival apps). It’s also compatible with stacks of Android devices and versions. If you have Android 2.3.3 or later you’re good to go, provided, of course, that your device has a camera.